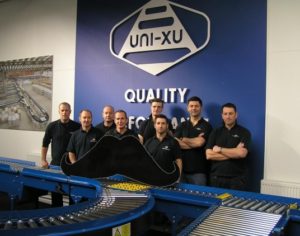 Eight of our employees are joining thousands of men worldwide to effectively become walking, talking billboards to raise awareness around the often ignored issue of men’s health.

For the 30 days of November, or ‘Movember’ as it is now commonly known amongst the fundraisers (an amalgamation of ‘mo’ for moustache and ‘November’), the team will grow moustaches with the aim of raising vital funds and awareness for men’s health, specifically prostate and testicular cancer.

Movember has been going for 10 years. So far it has raised £184m, and participation is said to be pretty much doubling year on year. In 2011, over 854,000 people got on board the campaign.

Conveyor Units’ Captain of the Movember team Simon Lucock, said he had been inspired to form the group as it is a subject which is close to his heart having had a close family member diagnosed with prostate cancer. Simon commented, “More than 1 in 3 people will develop some form of cancer in their lifetime in the UK – it is something which touches everyone. We all know someone who has been affected by it. So anything which helps to change attitudes and habits relating to men’s health and raises awareness about early detection and ultimately reduces the number of preventable deaths has to be a good thing! And, it’s a lot more fun than a “fun” run!”

The members, or “Mo Bros” as they are known, whose ages range from 23 – 46, hope to raise in excess of £1000 by sprouting their moustaches. Each has registered at ‘movember.com’ and each had a clean shaven face on November 1st. It is down to them now for the entire month to grow and groom a moustache!

Funds raised in the UK are directed to programmes run directly by Movember and its men’s health partners, Prostate Cancer UK and the Institute of Cancer Research.